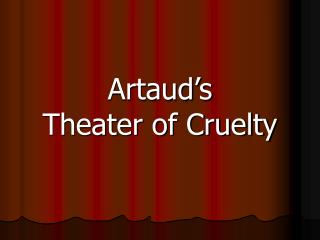 Artaud’s Theater of Cruelty. Introduction. During the early 1930s, the French dramatist and actor Antonin Artaud put forth a theory for a Surrealist theatre called the Theatre of Cruelty .

Philips Home Theatre – The Imagination Beyond From Your Sound!! - Philips is one of the best brand in amongst all brand

May 13 – Theater of the Absurd - . who’s on first? characteristics of theater of the absurd close reading and

The History of Theatre - The beginning/ancient greece. the history of theatre. just to review…. storytelling was a

The English Restoration and Later Theatre - . restoration. for 18 years theatre stayed in hibernation under the rule of

Elizabethan and jacobean theatre - William shakespeare from the tempest, iv, i (1610-11) . our revels now are ended.