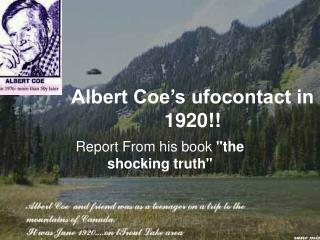 Albert Coe’s ufocontact in 1920!!. Report From his book "the shocking truth". as a teenager, he was on a trip to the mountains of Canada - June 1920. They were to drift down the river in a canoe.

The Shocking Truth - Electrostatics. the shocking truth. what is electrostatics?. definition: electricity at rest

Women in Canada in the 1920’s - . by 1918 all canadian women can vote in federal elections. however, women are still

In the name of God Albert EINSTEIN - . albert enistein was a scientist in the early 1900s. albert einstein was a

Albert Einstein Quiz - . by eamon mott. as you can tell the books’ main character is albert einstein, but where was he

The Roaring 20’s - . chapter 13. get out your roaring 20’s packets. prohibition women’s suffrage life during the