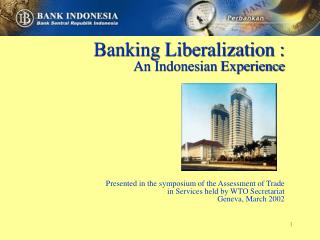 Banking Liberalization : An Indonesian Experience Presented in the symposium of the Assessment of Trade in Services held by WTO Secretariat Geneva, March 2002 AGENDA I. INTRODUCTION II. BANKING REFORMS & LIBERALIZATION

UNEP Country Project on Trade Liberalisation in the Agriculture Sector and the Environment - . the rice sector in nigeria

BANKING - . banking. all activities pertaining to people’s need for money, under various categories (including

Norges Bank Workshop Writing Central Bank and Monetary History – what are the issues? - Writing on the bank of italy

A Bank for the Poor or a Poor Bank: Muhammad Yunus - . the man phd in economics taught in us then in home country

UNEP Country Project on Trade Liberalisation in the Agriculture sector and the Environment - . the rice sector in