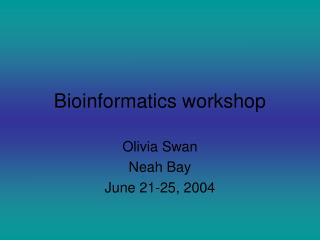 Bioinformatics workshop. Olivia Swan Neah Bay June 21-25, 2004. The Ride Here!!!!. At first Lesly and I met Ching-Pa and Lin Hia at the Museum After we left Neah Bay we went to pick up Cynthia at Sappho

Bioinformatics Workshop - . we started by discussing what bioinformatics is and how it is used we learned that dna is the

Workshop in Bioinformatics - . eran halperin. the human genome project. “what we are announcing today is that we

Bioinformatics Workshop 1 Sequences and Similarity Searches - . open a web browser and type in the url: