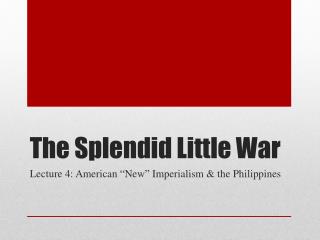 Spanish-American War - . identify reasons for the war; explain goals of the anti-imperialist league. rebellion against

Introduction to The Spanish-American War - . learning target: i can understand the causes of the spanish american war.

Before the Battle - . the armies. union - army of the cumberland gen. william rosecrans confederacy - army of tennessee

Imperialism - . the united states becomes a world power. what should i know by the end of this unit?. dollar diplomacy

The Yellow Press and T he Spanish American War - . yellow

Imperialists vs. Anti-Imperialists - . the world is ours! or maybe it’s not. imperialism. the creation and/or

WRITING GUIDELINES / TUTORIALOUTLET DOT COM - Summary the verdict is an awesome film. properly viewed as one of the best