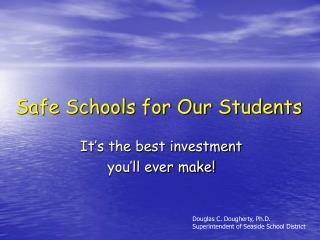 Safe Schools for Our Students

Safe Schools for Our Students

Guidelines and Resources for Internet Safety in Schools - . lesson plans - examples for the integration of internet

S.A.V.E. Safe Schools Against Violence in Education - . prepared by: director of security and safety steve chatterton

Florida’s Safe Routes to School Program - . to increase the number of students walking and biking to school to improve

Reporting of Incidents Concerning School Safety and the Educational Climate - Dignity for all students act and vadir.

Food Safe Schools : what‘s it all about? - . presentation objectives.  participants will gain an understanding of