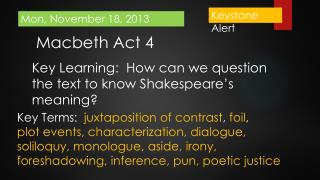 Macbeth vocab - . thane (n.). a nobleman under service of a king, much like a knight known by the names of the places

Macbeth - . learning goals:. try strategies for reading shakespearean language get familiar with the characters and

A PowerPoint Summary - . act i, scene 1. three witches gather and say that they’ll meet with macbeth before sunset and

Formal vs Informal Word Choice - . dear royal shakespeare company,i read in the stage today that you are casting for