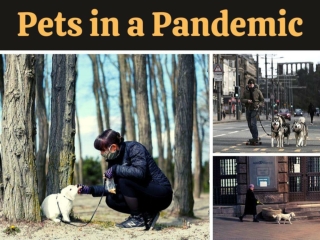 MANAGING A PANDEMIC IN SENEGAL - Simulation exercises for action to be taken in the event of an influenza pandemic.

Palm Sunday in a pandemic - Christian faithful, who normally congregate to celebrate the beginning of holy week, stay

Pets in Japan - By courtney cranage. pets in japan. pets and japanese

During a Pandemic - . additional measures to reduce spread of infection in the workplace. additional cleaning. clean

A Global Pandemic? - The world health organization (who) declared last week that the much hyped but decidedly mild swine

Pets - . and other animals. wild animals. grammar: test test. comparative and superlative degrees of the adjectives. the

Pets - . what makes a good pet? furriness? inexpensive? easy to take care of? practical and realistic! why is having a

PETS - . pets. animals. i love animals as they are always happy to see you and keep us accompanied. people who live alone

PETS - . i have got two pets – a rabbit and a hamster. the rabbit is a female and her name is flopsy. she is about

Pets - . can you guess which types of animals these sentences are describing?. pets. my pet has beautiful, long ears.