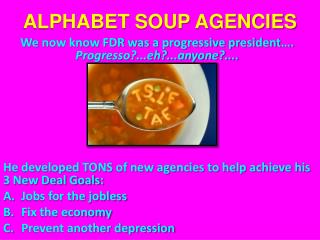 ALPHABET SOUP AGENCIES. We now know FDR was a progressive president…. Progresso?...eh?...anyone?.... He developed TONS of new agencies to help achieve his 3 New Deal Goals: Jobs for the jobless Fix the economy Prevent another depression. ALPHABET SOUP - . the abcs of the dietary guidelines. the caveman diet. balance the food you eat with activity to

Alphabet Soup - . can you identify the company or brand associated with each