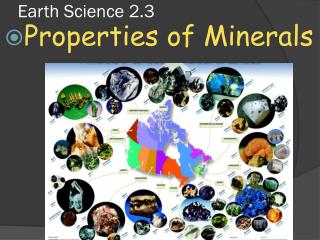 Earth Science 2.3. Properties of Minerals. Properties Minerals. As you can see from the illustration at right, minerals occur in many different shapes and colors. 8 main characteristics are used to identify and differentiate mineral groups from each other Color Streak Luster Crystal form