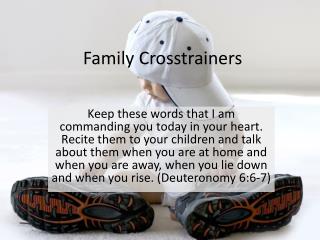 Family Crosstrainers. Keep these words that I am commanding you today in your heart. Recite them to your children and talk about them when you are at home and when you are away, when you lie down and when you rise. ( Deuteronomy 6:6-7). Sins Have Consequences. The BREWER FAMILY Genealogy - . preparation by tonia holleman presented at the 2014 family reunion in wichita, ks by

Expanding the Family Circle - . expanding the family circle. module i. welcome. before the training begins…. have you

SQUASH THEME - C) explain why many muslims are against abortion. squash theme. unit 3 marriage and the family. 3.1

The Royal Family - . made by : joanna hołubowicz. the royal family. the queen is supported in her work as head of state

Homology - . orthology, paralogy, xenology. what is the relationship of proteins included in a pfam family?. homologs,

Sit with your family - . what you need out: family supply poster daily journal sheet pen/pencil notebook or paper to take