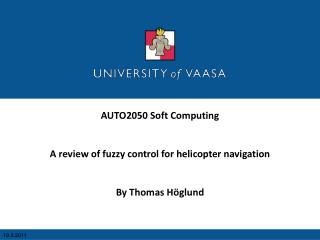 AUTO2050 Soft Computing A review of fuzzy control for helicopter navigation By Thomas Höglund. 19.3.2011. About helicopters. Handling a normal helicopter requires much skill of the operator who has to simultaneously manipulate several controls. Fuzzy System - . why fuzzy. based on intuition and judgment no need for a mathematical model provides a smooth transition

Why use Fuzzy Logic in Power Electronics - . parameter variation that can be compensated with designer judgment processes