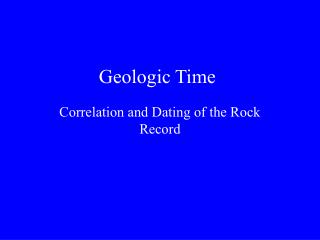 Geologic Time. Correlation and Dating of the Rock Record. Time. Relative Order of deposition of a body of rock based on position Absolute A number representing the time a body of rock was deposited. Relative Time. Determining of sequence of events Which came first?. The Geologic Time Scale - . sections of time. era two or more geological periods comprise an era, which is hundreds of

Earth History - . it is estimated that the earth formed along with the solar system 4.6 billion years ago (4,600 mya).

What events characterize the major periods of geologic time? - . a journey through geologic time. section 14.1. geologic

Geologic Time - . use these two trash pits to explain relative time. what can you infer about the populations in these

NOTE CHECK - . what is the difference between relative and absolute dating? what is superposition? what era did humans

Geologic Time - . a brief history of the 4.6 billion history of planet earth. the geologic time scale. the standard

GEOLOGIC TIME SCALE - . because the time span of earth’s past is so great, geologists use the geologic time scale to

Ch. 5 Rocks, Fossils, and Time - . esci 102. geologic record. the fact that earth has changed through time is apparent

Geologic Time - . geology deals with time, both in an absolute numerical sense and in a relative before/during/after