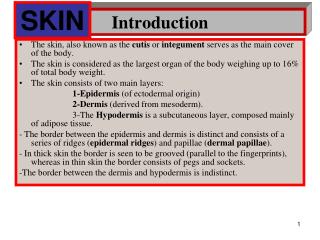 SKIN. Introduction. The skin, also known as the cutis or integument serves as the main cover of the body. The skin is considered as the largest organ of the body weighing up to 16% of total body weight. The skin consists of two main layers: