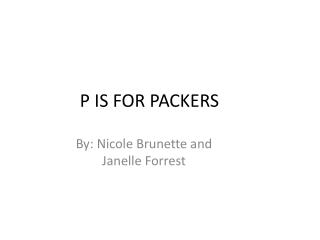 P IS FOR PACKERS P IS FOR PACKERS . By: Nicole Brunette and Janelle Forrest. B IS FOR BELLIN RUN. Bellin Run is in Wisconsin and is a really BIG run . It is a benefit for Bellin Health Care in WI. The Bellin Run is very good for your health. More than 500 people join the Bellin Run each year.

P IS FOR PACKERS

Packers and Movers Bangalore - Looking for reliable packers and movers in bangalore? all movers and packers offers finest

The Green Bay Packers - Get an in depth look on the super bowl champs!. the green bay packers. presented by: sean

The Pork Industry - . more than just the other white meat. pork industry is very different than it was 25 years ago.