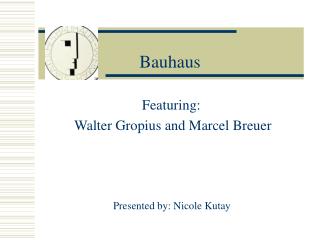 Bauhaus. Featuring: Walter Gropius and Marcel Breuer. Presented by: Nicole Kutay. History of Bauhaus. The Bauhaus was founded in 1919 by Walter Gropius. Gropius came from the Werkbund Movement, which aimed to integrate art and economics, and to add an element of engineering to art. Aesthetic Education at the Bauhaus - . what was the bauhaus ?. http:// youtu.be/3_c6albbcci the staatliches bauhaus was

Lesson Objectives - . all: understand the bauhaus movement &amp; their design techniques l4 most: learn how to use