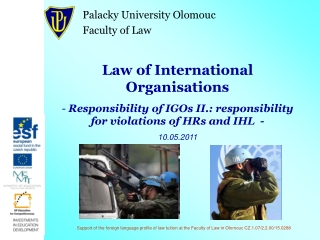 Palacky University Olomouc Faculty of Law. Law of International Organisations Responsibility of I G O s II.: responsibility for violations of HRs and IHL - 10.05.2011. Support of the foreign language profile of law tuition a t the Faculty of Law in Olomouc C Z.1.07/2.2.00/15.0288. Translating for International Organisations - . focus on the united nations. definition &amp; significance. what is

Subjects of international law - . lecturer: jiang he. the concept of the subject. substantive implication procedural

Law of International Institutions - . an introduction by dr. kathy-ann brown. presentation outline. the development of

Principles of International Law - . an introduction. intro. one of the main functions of international law is to govern

paradox of international law: - . attempt to impose rules of behavior on entities that not accept exists authority

A History of War and the Law of Armed Conflict - . preliminary statements of purpose : . law is not just applied to the

Arms Control and the Laws of War - . lesson