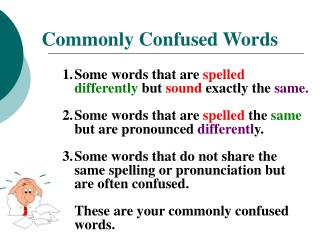 Confusing Words - . can you identify the problems in these sentences?. i’m excited wear going to the beach! my sister

Grammar Ace! - . commonly confused words game 2. here’s how it works:. each correct answer allows you to move to the

Commonly Confused Words - . notes for grammar and mechanics toolkit. alot / a lot / allot. alot – not one word a lot

Homographs, Homonyms, and Homophones - . homonyms. words that have different meanings and are either spelled the same or

FREQUENTLY MISUSED WORDS - . beware!. accept vs except. accept means to receive something . except means to exclude

Learning Objective : correctly use frequently confused words - Cfu. what are we going to do? what does recognize mean? * Homonyms * * - . two or more words that have the same spelling or pronunciation but have different meanings. homophone.

Commonly Confused Words - . grammar unit #4 - usage. remember this from the pretest?. [chose/choose] a planet to study.