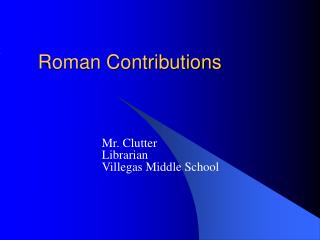 Ancient Rome - . the roman republic on the eve of the assassination of gaius julius caesar – c. 44 bc. phases of roman

An Army Like No Other:The Roman Army: The Roman Legions - . the roman legion military training:the art of war the roman

Roman Contributions - . students will identify and explain the contributions of the roman empire. system of laws. code of

Roman Art - . by nandin natsagdorj. what is roman art?. roman art includes arts created in ancient rome, in the

Roman Civil Procedure - . roman civilisation. the city of rome was founded in 753 bc the roman republic was established

The Nature of Roman Mythology - Roman outlook. animism vs. anthropomorphismnumen (pl. numina) from nuere (to nod")in

The Lasting Contributions of Rome - . standard 7.1. architecture. public works were structures built by the government

Early Strengths and Lasting Contributions of Rome - The preservation and transmission of christianity. early strengths