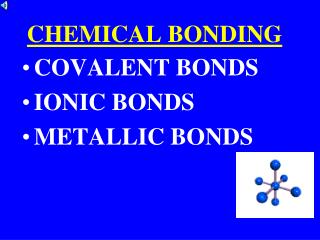 CHEMICAL BONDING. COVALENT BONDS IONIC BONDS METALLIC BONDS. Reflection ( pg 62). What is a metallic bond? Compare/contrast it to ionic/covalent bond. Metallic Bonds. How atoms are held together in the solid. Metals hold onto there valence electrons very weakly .

CHEMICAL BONDS - . i. chemical compounds. compounds are made from more than one type of atom (element) are made during

Bonding and Naming - . bonding and naming. 1. what is a chemical bond? 2. how do atoms bond with each other? how does the

Chemical Bonding: Bonding Theory and Lewis Formulas - . there are certain trends within the periodic table which affect