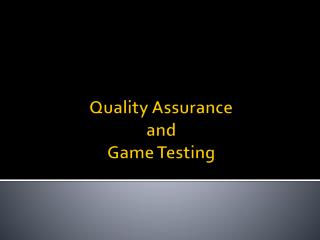 Difference between Quality Assurance and Quality Control in Software Testing - Quality is summiting the prerequisite, Understand More of User Testing - Have a problem with your website or business application? no worries, we can fix that!

Software Testing and Quality Assurance: Introduction and Terminology - . reading: john mcgregor and david a. sykes, a

International cooperation in recognition and quality assurance - . what can be learned from higher education ? by

QUALITY ASSURANCE PROGRAM - . state the duties, responsibilities, and qualification requirements of the following

Module 5: Assuring the Quality of HIV Rapid Testing - . a systems approach to quality. learning objectives. at the end of