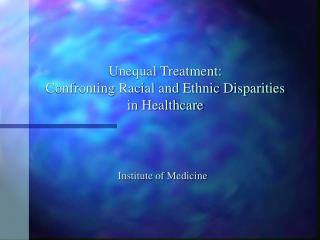 Unequal Treatment: Confronting Racial and Ethnic Disparities in Healthcare. Institute of Medicine. Do you think the average African American is better off, worse off, or just about as well off as the average white person in terms of access to health care?. Racial, Ethnic and Socioeconomic Health Disparities in the US - . richard lichtenstein ph.d., mph university of michigan

SOCIAL STRATIFICATION: - . without exception modern societies such as our own are socially stratified. this means that