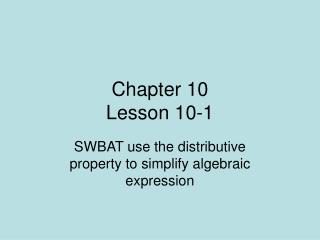 Chapter 10 Lesson 10-1. SWBAT use the distributive property to simplify algebraic expression. Bellwork. Grab a textbook Turn to page 467 Do the EVEN PROBLEMS ONLY on the Getting Started quiz on this page. This is to help you remember skills you will need for Chapter 10 Chapter 10 Lesson 1 - . ties to great britain. the paxton boys. a group of 57 frontiers who were angry because indians

Lesson 10-1 - . turning savings into investments financing business operations and growth in an important part of the

Lesson 10 - 1 - . comparing two proportions. objectives. determine whether the conditions for performing inference are

Lesson 10 - 1 - . the language of hypothesis testing. objectives. determine the null and alternative hypothesis from a

Chapter 10 Lesson 4 - . choosing to be tobacco free. saying no to tobacco. the first line of defense is to be prepared

Chapter 10 Lesson 4 - . eq: how did president roosevelt help change the economy? eq: what were the economic and political

Chapter 10 Lesson 2 - After quiz: in your notebook, answer the following questions. use full sentences and re-state the

Lesson 10 Day 1 - . you will need paper, pencil, and your book. question of the day. how can people and animals help one

Lesson 10 Dialogue 1 - . grammar. topic-comment sentences. when a noun or noun phrase has become established as a

Chapter 10 Lesson 1: Circles and Circumference - . objective: learn to find the circumference of circles. a circle is