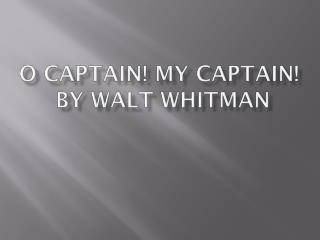 O Captain! My Captain! By Walt Whitman. Walt Whitman. May 31, 1819 – March 26, 1892 Left school at age 11 to work and bring in money for his family. Jobs included printing, publishing, teaching, writing, journalist, etc. As early as 1850, he began writing what would become Leaves of Grass.

Walt Whitman 1819-1892 - . walt whitman as a young man. less than a hundred years after the united states was founded,

Walt Whitman (1819-1892) - . and the universal litterature. by josé antonio garcía. introduction : why universal

“Oh Captain, My Captain” - . walt whitman a review of romanticism. round 1. with your group, design a boarder for

Walt Whitman Scavenger Hunt - . http://waltwhitmanenglishtrip.wikispaces.com/. question 1. what is the inscription on the

O Captain! My Captain! - . analyzing walt whitman’s famous poem. title. what do you think the poem will be about? (your

Poems - . 8th grade. introduction to poetry by billy collins. i ask them to take a poem and hold it up to the light like