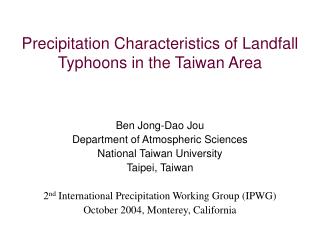 Precipitation Characteristics of Landfall Typhoons in the Taiwan Area Precipitation Characteristics of Landfall Typhoons in the Taiwan Area

Typhoons - . by katherine kosup. this picture is from nasa. it shows the paths of typhoons. typhoons mostly happen in the

Typhoons - . anatomy, patterns, effects of, and itcz. what is common to them?. typhoons develop from the nw of the

Taiwan - Moon - In taiwan, children were told not to point their finger at the moon. it is believed that pointing your