Into the Wild - PowerPoint PPT Presentation 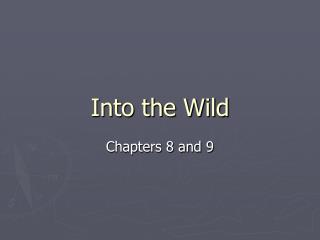 Into the Wild. Chapters 8 and 9. Opinions about Alex. Many Alaskans expressed strongly NEGATIVE opinions Letters received by Krakauer: “Alex is a nut…” “Krakauer is a kook if he doesn’t think Chris ‘Alexander Supertramp’ McCandless was a kook.”

INTO THE WILD By Jon Krakauer - . “in april 1992, a young man from a well-to-do east coast family hitchhiked to alaska

Into the Wild Chapters 5-9 - . into the wild chapters 5-9 stations activity. with your group, you will visit each station

Into the Wild Jon Krakauer - . about the author. jon krakauer was born in brookline, massachusetts, in 1954. his family

Into the Wild - . chapters 8 and 9. opinions about alex. many alaskans expressed strongly negative opinions letters

Warriors: Into the Wild By: Erin Hunter - . sai mallipedhi. about the author. did you know that erin hunter is actually

Jon Krakauer - (he’s not really as creepy as this picture makes him look….). jon krakauer. author of into the wild.

The Tabernacle in the Wilderness pt. 2 - . note: any videos in this presentation will only play online. after you

Into The Wild - Jon krakauer. into the wild. does everyone have a tragic flaw? is it true that happiness can only be

Warriors: Into the Wild - . by erin hunter. setting. the setting takes place near forest, rivers, and houses. each clan

Into the Wild - . “i've decided i'm going to live this life for some time to come. the freedom and simple beauty is

Into the Wild Bellringer # 8 1-9-12 - . directions: answer the following questions with your knowledge of pages 70-80 of

Into the Wild - John krakauer’s. into the wild. denali national park. the bus. hello, christopher mccandless ! .

The Sanctuary in The Wilderness - . lay evg. bc sono. the