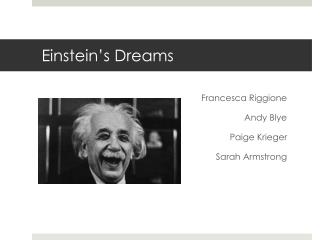 RADIATION - . &quot;only two things are infinite: the universe and human stupidity. and i'm not certain about the

Cheap Flights Review - Cheapflights has made its debut to offer vacationers, backpackers, travelers, and those seeking a

Me and My Hero: Albert Einstein - . by eric

An Age of Uncertainty- The 1920s - . 1) albert einstein’s theory of relativity shattered the belief that the world

By Taylor Olson - Dreams is it important to understand and interpret our dreams? “dreams are a conversation with