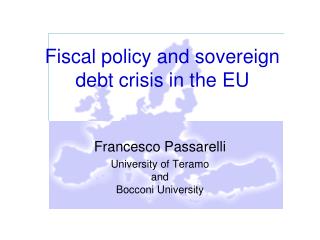 Fiscal policy and sovereign debt crisis in the EU Fiscal policy and sovereign debt crisis in the EU. Francesco Passarelli University of Teramo and Bocconi University. The free-rider problem. In a currency union governments have strong incentives to bail out a country that borrows excessively Two ways to solve this:

Fiscal policy and sovereign debt crisis in the EU

34 The Influence of Monetary and Fiscal Policy on Aggregate Demand - . aggregate demand. many factors influence aggregate

Lesson 4: - . government policy and real estate finance. introduction. in this lesson, we will cover: federal

THE FOURFOLD WILL OF THE SOVEREIGN GOD - . does god make all decisions?. questions about the will of god. can an

Crisis, Resurgence, and the Millennium - . learning u.s. history via the presidencies. assignment: use the following

How the Crisis Has Changed the Economic Policy Paradigm - . scott t. fullwiler james a. leach chair in banking and

Test Review AE &amp; Fiscal Policy - . remember, the next test will be over ad/as [about half] and ae and fiscal

AP ® Government and Politics – United States: Monetary and Fiscal Policy and the 2009 Economic Recession - . with gary

Debt and Debt Crises - . ugo panizza unctad. there are my own views. the standard view. facts countries get into debt