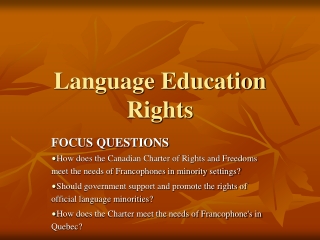 Collective Rights for Official and Minority Language Rights - . charter of rights and freedoms sections 16-22 and section

The Language of Civil Rights - . nigger. origin d erived from the latin word for the color black, niger originally used

LANGUAGE AND EDUCATION - . ‘language is not everything in education but without language everything is nothing in

Civil Rights in Education - Task analysis. 1. what do we want the learner to know?students should gain a historical

Language and Education - . does individual’s linguistics abilities affect his success in the formal education?. direct