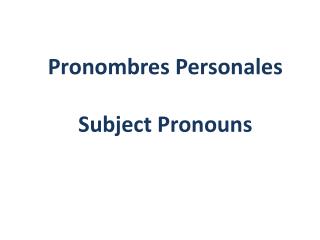 Pronombres Personales Subject Pronouns. Pronouns. In English, we use pronouns every day. Pronouns are the words that replace nouns in a sentence. For example, imagine you were telling a story about your friend Veronica. It might go something like this: Subject pronouns - . a pronoun is a word that takes the place of a noun. what is a pronoun?. it’s a word used instead

Subject Pronouns - . objective: identify subject pronouns in sentences. like a noun, a pronoun can be used as the subject

SUBJECT PRONOUNS - . terms to know. subject pronoun - takes the place of a subject noun or nouns . the pronoun will take