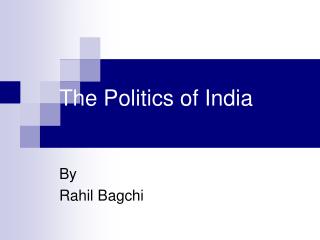 The Politics of India The Politics of India. By Rahil Bagchi. Political System. India. Independence. India got independence from Britain on Aug 15 th , 1947 The Constitution of India was implemented on Jan 26, 1950 Jawaharlal Nehru was the first Prime Minister Dr. Rajendra Prasad was the first President.

The Politics of India

India-Political - . by the freemasons. kushan state. vast trade with europe use of monsoon winds to facilitate trade with

INDIA POLITICAL - . caste system and independence. who won caste system tag?. was there any chance for anyone from groups

The Decline of the Congress &amp; the Rise of the BJP - . gov 1255: politics of india prof prerna singh. the decline

POLITICAL ECONOMY OF ARUNACHAL PRADESH IN A RISING INDIA - . center for china’s borderland history and geography