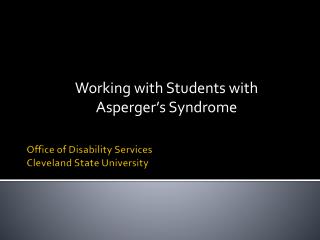 Working with Students with Asperger’s Syndrome . Office of Disability Services Cleveland State University. Asperger’s Syndrome: What is it?. A developmental disorder Part of the autism spectrum disorders Communication and socialization Impact on learning Office of Campus Life - Disability Support Services - . learn how to utilize the blackboard system to distribute

General Education Assessment at Cleveland State University - . what we have accomplished what we have yet to do. from