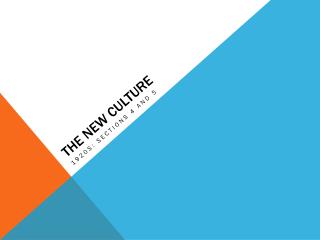 The New Culture. 1920s: Sections 4 and 5. Objectives. Trace the reasons that leisure time increased during the 1920s. Analyze how the development of popular culture united Americans and created new activities and heroes. Discuss the advancements of women in the 1920s. Culture - . this presentation introduces students to the anthropological definition and use of the concept of culture. it

Culture Terms - . warm-up. what is a taboo and how does this relate to the study of culture?. culture trait. single