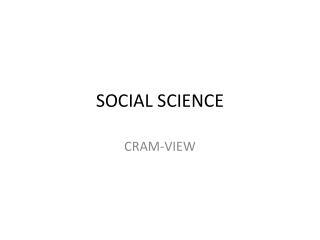 SOCIAL SCIENCE. CRAM-VIEW. GEOGRAPHY. Russia is the world’s largest country at 17.1 million square km Only about 7% of the Russian steppes in the south is fertile Russia has many rivers but no natural ocean ports, and many of its leaders have launched wars to gain sea access SOCIAL SCIENCE - . the schlieffen plan. kaiser is the german word for emperor. in 1904, the german kaiser wilhelm ll

Social Science Department - . technology plan for our commerce year 9 class “running a business” from the start to

Social Science Experiment - . jan-willem bullee. background. effectiveness of authority on compliance we can get some of

Social Science Models - . what elements (at least two) are necessary for a “social science model”?. why regression?

Social Science Models - Don’t write down the material on the following slides , just listen to the discussion and try