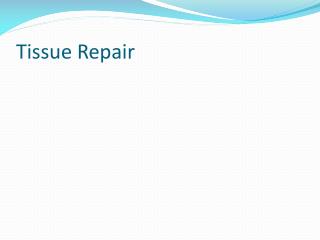 Tissue Repair - . ways of repairing tissue. tissue repair depends on the type of tissue damaged and the severity of the

Tissue Repair - . dr. raid jastania. what is repair? when does regeneration occur? when does fibrosis occur? what are the

Soft Tissue Repair - Soft tissues of our body like muscles, ligaments and tendons are often subject to damage by wear and