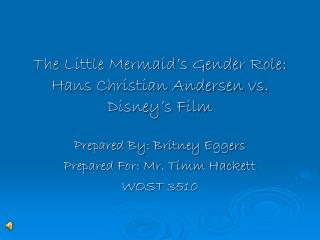 Mermaid School - Learning how to swim like a mermaid in

The Little Mermaid - . by: jessica pritchett and joey bateman. exposition set the scene. meet ariel and her friends

Hans Christian Andersen His Life and His Fairy Tales - . his life. born in 1808 in odense, denmark father was a shoemaker

Hans Christian Andersen - . who was hans christian andersen?. he was a danish fairy tale stories writer and poet. he had

Prepared by Ms. Hess - . what is mla style?. a method of: formatting academic essays citing all the sources you use in

Hywel and the Mermaid - . once upon a time, there was a fisherman called hywel . as he sat on the rocks one day, . if you

The little mermaid - . by tracy ramirez &amp;&amp; tabby schwab. expostion. once upon a time there was a mermaid

Sex role or gender stereotypes - . sex role stereotype. this is defined as: an organised belief about the behaviour,

The Little Mermaid - . by: larissa held &amp; jared masker. exposition. “once upon a time, there lived a mermaid

The Little Mermaid - . a comparison through four lenses. introduction. in 1836, hans christian andersen, a danish author,

If Disney Ran Your Hospital - . some things you would do differently fred lee. we have reached the ceiling in how much we