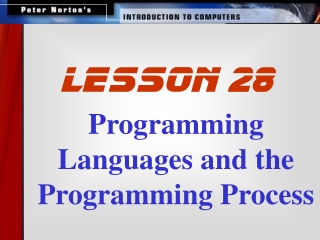 What is Programming? - . aspects of programming, computer languages, objects and object-oriented programming. many

Programming language history - . created by wordle.net, from the text in this slide. tower of babel, cacm cover, jan.

Why is programming fun? - . what delights may its practitioner expect as a reward? first is the sheer joy of making

What is Python Programming Language? - . python is a general-purpose interpreted, interactive, object-oriented and

CLASSIFICATION OF PROGRAMMING LANGUAGES - . to facilitate discussion on any subject it is convenient to group together

Introduction to Computer Programming - . program design. by: mr. baha hanene. learning outcomes. in this chapter we will