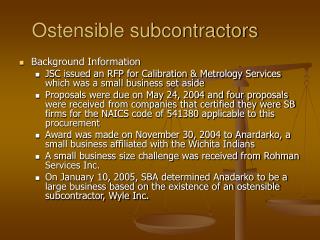 Ostensible subcontractors . Background Information JSC issued an RFP for Calibration & Metrology Services which was a small business set aside

JOINT VENTURES - . items to be covered. when permitted size requirements in joint ventures 8(a) joint venture

Doing Business with Department of Enterprise Services for General Contractors and Subcontractors - . june 19, 2013.

What Every Corporate Counsel Needs To Know About Doing Business With the Federal Government Presented By: - . david Construction ERP | eresource nfra ER - Numerous companies, all over the world, are making use of innovative software

Communication of Control Measures - . who do we need to communicate to. employees subcontractors professionals visitors.