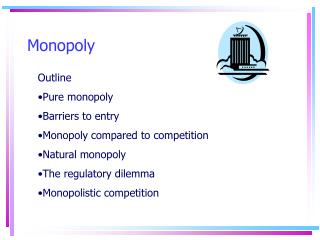 OLIGOPOLY - . what is oligopoly?. another market type that stands between perfect competition and monopoly. oligopoly is

Ch 11: Monopoly and Monopsony - . in the perfectly competitive market, the individual firm or consumer had no effect on