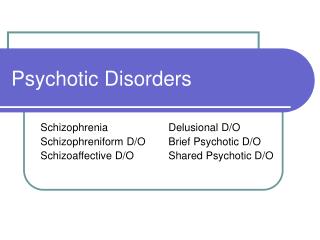 Chapter 16 Schizophrenia and Other Psychotic Disorders - . features of schizophrenia. prevalence in u.s. is 1.1%. average

Psychotic disorders - . heidi combs, md. at the end of this session you will be able to:. appreciate the prevalence of