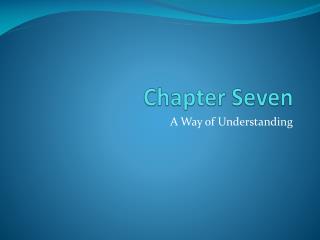 Chapter Seven. A Way of Understanding. Chapter Outline. Preliminary Considerations Definitions Objections to Thematic Analysis How the Bible Traditionally Has Been Read Major Themes in the Bible Relationship to God and with Other Human Beings: the Decalogue

Chapter Seven - . introduction. changes in bond prices and the associated changes in interest rates, can have a

Chapter Seven - . the living primates. the primate order. primates are best defined in terms of their adaptability ,

CHAPTER SEVEN - . the big question!. would you stay or try and flee?. i can list three things the colonists did to