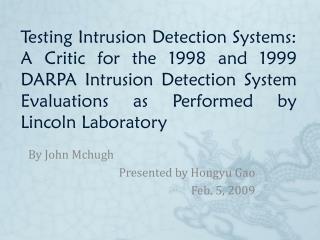 By John Mchugh Presented by Hongyu Gao Feb. 5, 2009 - Testing intrusion detection systems: a critic for the 1998 and

Presented by Li-xia Gao 2010.07.18 - . neural circuits of the basal ganglia are critical for motor planning and action

Presented by: John Ogan - Future of our salmon a summary of the origins and legal fundamentals of the role of artificial

By: Ms. McHugh - Soaring through the solar system. by: ms. mchugh. the universe. what is the universe? are there more

Presented by: John Paisley - Active learning with feedback on both features and instances h. raghavan, o. madani and r.

By Alicia McHugh - . pine martin . the pine marten. what is a pine

Presented by Dr. John Draper - . grandson, son . . . mother and grandmothers were teachers, mom was an assistant

John Cabot presented by Tony + Lydia - . john cabot. john cabot was born 1850 in genoa, italy. no one knows when he