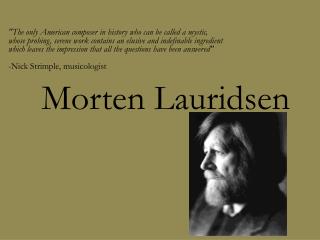 Morten Lauridsen. "The only American composer in history who can be called a mystic, whose probing, serene work contains an elusive and indefinable ingredient which leaves the impression that all the questions have been answered"  -Nick Strimple , musicologist. The Myth….