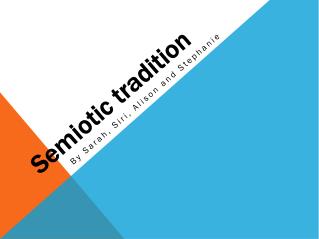 Semiotic tradition. By Sarah, Siri , Alison and Stephanie . Semiotic Tradition. The study of how signs and language create a reality and language. Language can be seen and defined through realms of Time Past, future and present Gender Masculine and Feminine (Ying and Yang) THE SEMIOTIC TRADITION - . ally sun. short video from “ the b ig b ang t heory”. definition . the theory and study of

Semiotic - . melissa chris katie jennie brent. what is semiotics?. study of sign processes or signification and

Semiotic Analysis - . making meaning. language (texts) a system of signs meaning not obvious, must be elicited signs are

A semiotic approach to culture - . miguel lópez 10.11.11 university of jyväskylä. the peters

The Semiotic Method: A Primer - . english 202 monday february 2. quiz question 1. how many hours a week—at a

The ‘Greimas’ or Semiotic Square

Professional text on Writing: semiotic implications - . emma cooper mt literacy. i would like to begin…. by introducing

Tradition - . eve. christmas supper – it contains of twelve dishes,these can be for example:. fried carp carp in aspic