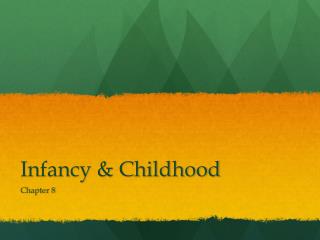 Hide and Seek by Vernon Scannell - . before he got into poetry he spent time in tough occupations including boxing and

History of childhood and causation of health - . are lives programmed?. what is a child?. un: 0-18 years and what is

GROWTH AND DEVELOPMENT INFANCY 0-3 YEARS - . throughout our lives we grow and develop. we change from being helpless