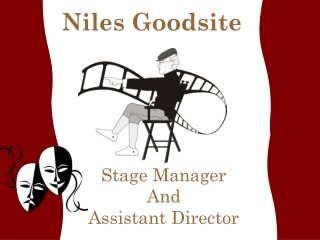 After working as a stage manager for several years, Niles Goodsite was given the opportunity to work with Executive Producers Walter Mosley and Laurence Fishburne as an Assistant Director. His responsibilities were overseeing set maintenance and making sure the filming of the movie coincided with the production schedule. As a first Assistant Director, Niles Goodsite had the opportunity to work on the set of the short film Blood on the Backlot and TV movie Always Outnumbered. He was also Assistant Director for episodic series such as Charmed and Star Trek Deep Space Nine. Ivor Goodsite Presentation - . welcome to your talk on building site safety. 1. ivor goodsite 2013 . do you know who

My Town Niles - . by: imani lowe. chatham county is the northernmost of georgia's six coastal counties. named for william

Spencer Niles - Professional Photographer - Spencer niles, as a professional photographer, has worked with many

Niles Township District 219 ELL Audit - . ed murphy. how many different languages are spoken in the homes of our

Payday Loans In Niles Michigan - Whether you need to rebuild your credit or searching for personal loans in michigan.