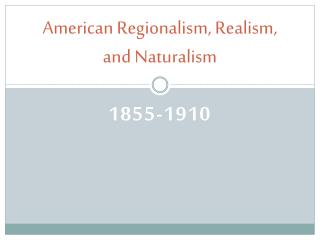 American Regionalism, Realism, and Naturalism. 1855-1910. Realism. “ The Civil War was a violent clash, not just of armies, but of ideas. Who was right, and who was wrong? What did it mean to be an American? Was any price too high to pay to keep the nation whole?”. What is Realism?. Realism, Concepts and Categories Or: how realism can be pragmatically useful for information systems - Vt. realism,

American Values in the 1950s - . the american dream in the 1950s. section 1: postwar america. after wwii, returning vets