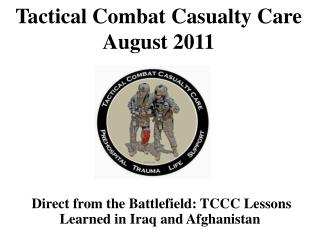 Tactical Combat Casualty Care August 2011 - Objectives. describe the role of firepower supremacy in the prevention of

Tactical Combat Casualty Care August 2011 - . introduction. pre-test. pretest. what is tccc and why do i need to learn

ANTIBIOTICS IN TACTICAL COMBAT CASUALTY CARE (TCCC) - . infections and sepsis are a late cause of morbidity and mortality