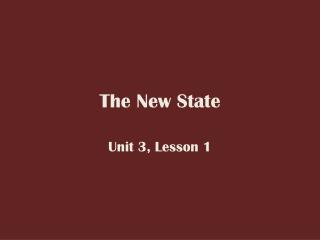 The New State. Unit 3, Lesson 1. Statehood for Ohio. More and more settlers moved to the Ohio Territory Census  official population count Showed more than 45,000 people were living in the area in 1800 How many people would it need to become a state? State the policy that included this.

Learn Your States! - . west. n.e. middlewest. s.e. southwest. click on a region to practice memorizing the states of that

Name that State - . introduction. * this is a game about guessing which state you have landed on. *the game consists of

First Aid - . first aid at work. commercial training. candidates will be able to: &gt; state the principles and aims

CONQUEST - . the game of tribal domination. round 1: each team will get 3 uncontested “freebies”. name that state

Finishing Federalism - . in the united states. reserved powers. where do we find them? how do they work?. state to state