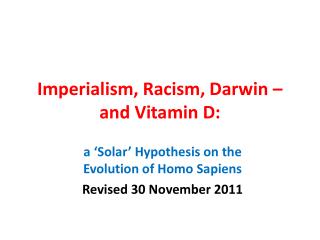 Imperialism, Racism, Darwin – and Vitamin D:. a ‘Solar’ Hypothesis on the Evolution of Homo Sapiens Revised 30 November 2011. Imperialism as a Universal Evil . Lesson Overview - . 16.1 darwin’s voyage of discovery. think about it . if you’d met young charles darwin, you

The Vitamins - . introduction. vitamins were discovered at the beginning of the twentieth century. vitamin : an

The Sunshine Vitamin in the 21st Century - Bone Benefits and Beyond? - . prof peter r ebeling department of medicine

Imperialism - . susan m. pojer and lynne pierce . who was doing it?. why would a nation want to practice imperialism?.

Chapter 33 - . the building of global empires. imperialism in asia, ca. 1914. the idea of imperialism. term dates from